Prometheus and the Alien Franchise

By: Sharon
In: Film and Television, Transhumanism 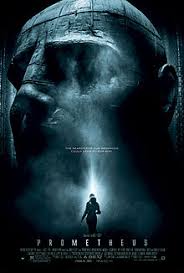 This won’t be a long post, but I just wanted to take a moment to mention that I’ve finally watched Ridley Scott’s Alien prequel, Prometheus. All in all, this movie is a flawed, little brother to the three, wonderfully creative movies starring Signourney Weaver. Based on the ending (which I won’t reveal for those who’ve not seen the film), it looks as though Scott plans to expand upon  the prequel, a la George Lucas and his Star Wars family of films. Of course, if we look in that direction, one has to consider whether or not to include the Alien vs Predator franchise as well–but I digress.

All in all, the film underwhelms. I had expected something much bigger (no pun intended). The underlying philosophy is ID (Intelligent Design) and its implications regarding a Creator God. Even at this, the film fails for me. The main character is wooden and unlikable (at least for me), which makes it difficult to identify with her faith versus science dilemma. Do I care what happens to her? Nope. In fact, the captain and his ‘betting’ cohorts struck me as more realistic and much more likable.

I plan to watch it once more before returning the DVD to Netflix. Perhaps, a second viewing will leave me with a different opinion. I’ll post more later….

By the way, Ridley Scott is giving interviews that imply he DOES plan to create a sequel to Prometheus. And I’ve also read that he’s dropping hints that the film’s setting is part of the ‘Blade Runner World’.  That should make Derek very happy.